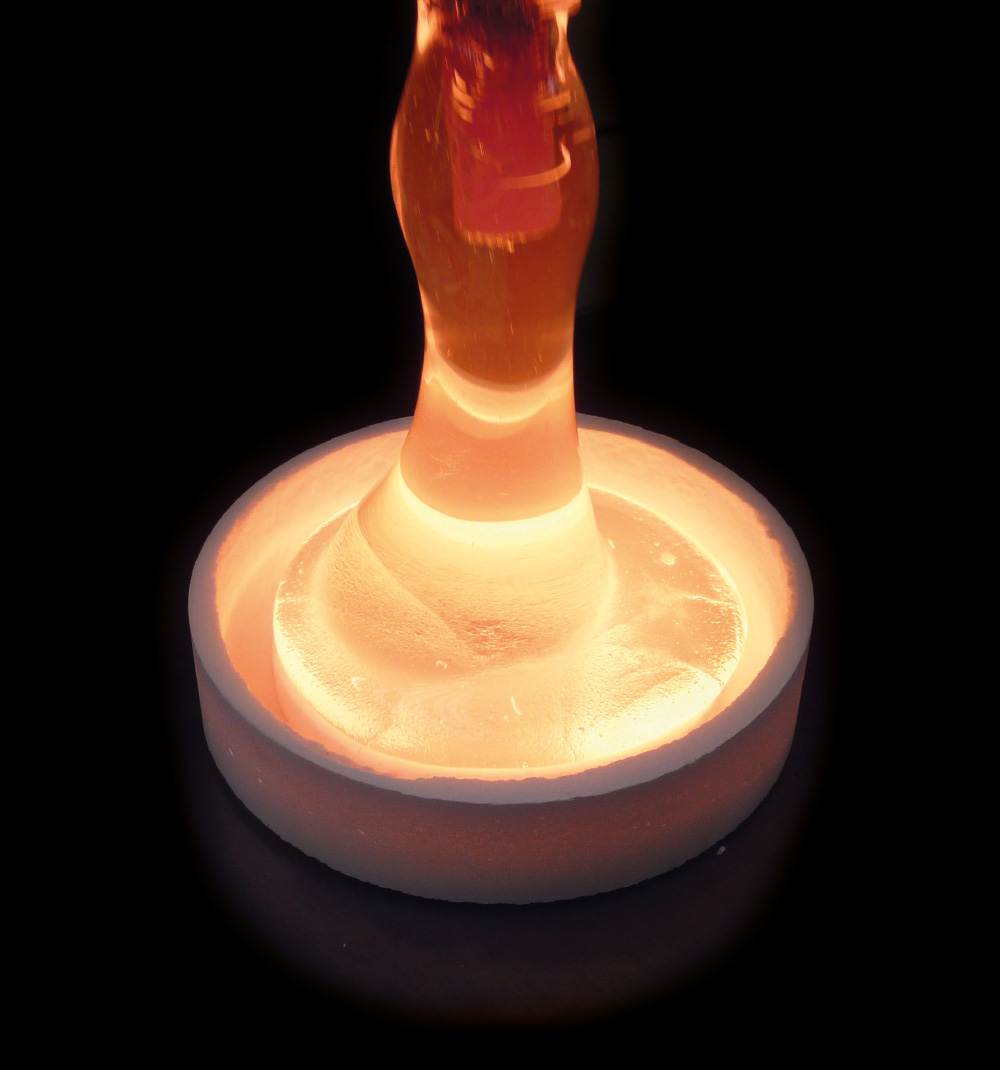 IM037 Molten glass being poured into a salt mould

The project Mould Machine was developed in close collaboration with Matteo Gonet. The aim was to explore the potential benefits of fire-resistant or refractory materials when producing moulds for glass objects. The students were thus invited to imagine prototypes for moulds and to express their intentions very clearly. The research process was largely based on a series of iterations and evaluation procedures, before and after being fired. Each stage in the project was clearly defined so as to optimise the tests carried out during the preparatory process.

MODELS
The requirements and relationships of Mould Machine are similar to those developed in the world of engineering, especially designs of experiments, defined as the organised series of experiments around which research is organised in the fields of science or industry.

REFRACTORY MATERIALS
After the workshop on traditional techniques carried out as part of Hot Tools, Matteo Gonet suggested transposing this reflection on creating moulding tools into the field of engineering. The idea was to explore the potential applications of fire-resistant or refractory materials generally used in tunnel building, and to test these materials to build moulds for glass casting.

DRAWING UP PROTOCOLS
It was then a matter of testing the properties of these materials, which are resistant to temperatures of up to 1600°C, by literally subjecting them to a trial by fire. Given its experimental and formal nature, there is no doubt that this workshop was the closest to taking a scientific approach in the strict sense.

TEST AND TRIAL
With their observations as a starting point, nine groups worked on setting up protocols for a selection of materials produced by the Kapyfract company. The idea was test these materials to build moulds for glass casting.

SYSTEMATIC PROCEDURE
Most of the refractory materials involved had never previously been used, let alone tested, in the context of creative research. Given that it was impossible to anticipate the results, each step was initially envisaged as a way of specifying the questions and avenues for the next stage. Hypotheses, experiments, validation or invalidation: each of the various avenues thus evolved as a result of systematic procedures for evaluating the results.

DIRECT CASTING
The idea was largely about questioning traditional moulding techniques, which generally use wax and involve complex processes. The benefit of refractory materials is that they are very easy to handle, so it is possible to sculpt them, weave them, stick or screw them. 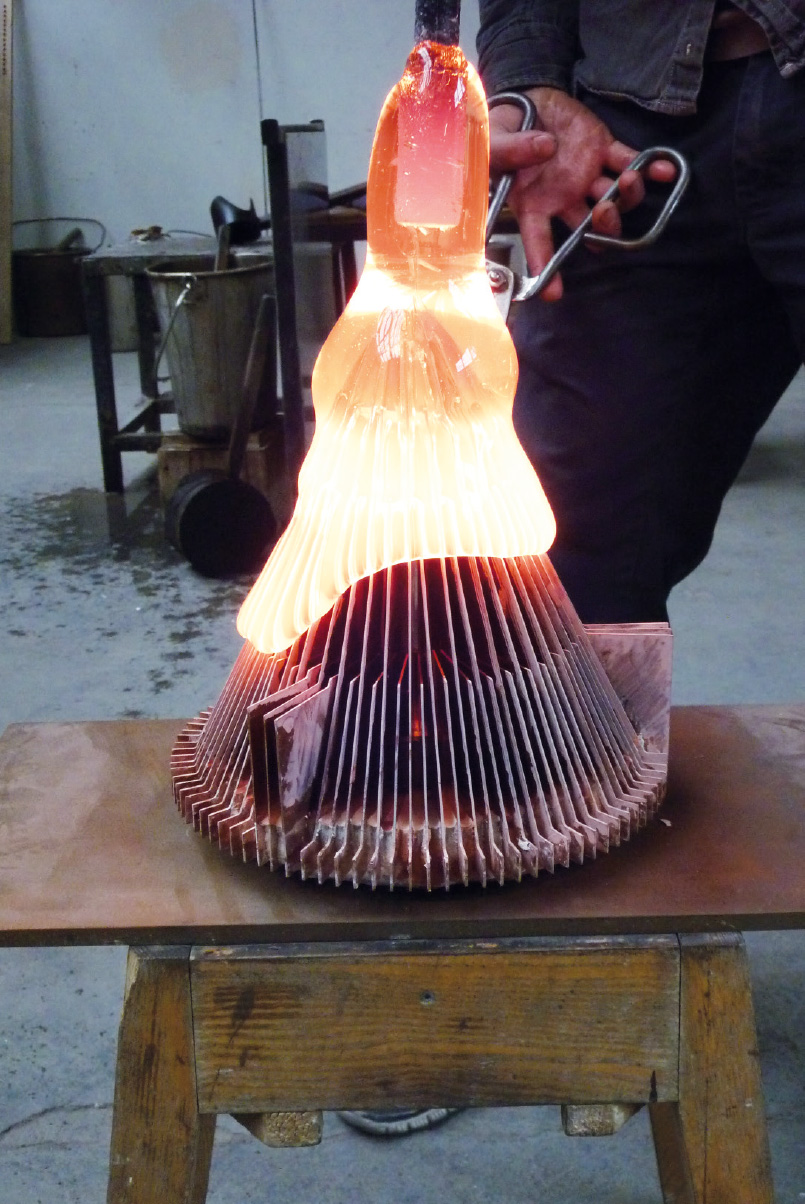 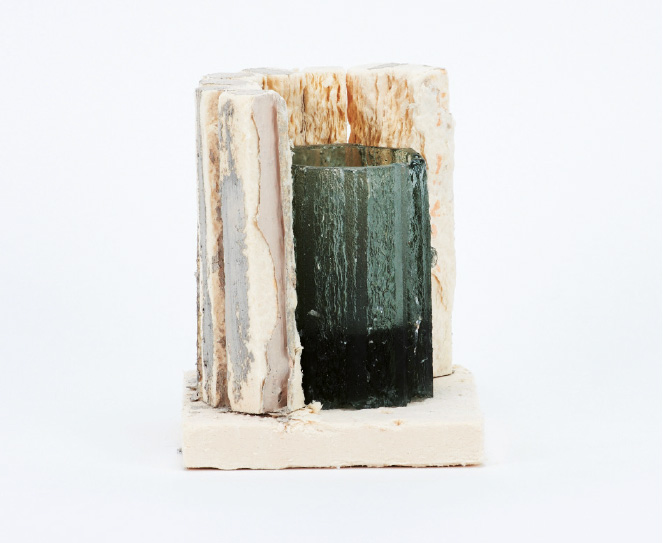 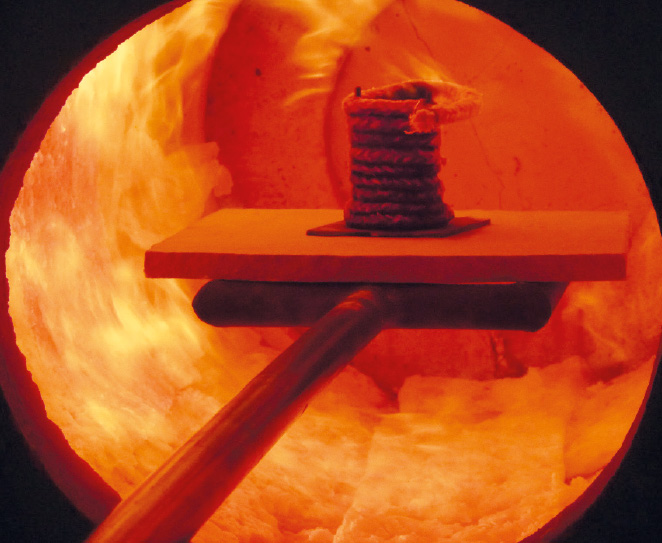 SAMPLES
With Mould Machine, it was not really about producing prototypes because there were too many uncertainties as to applying these refractory materials. Consequently, it was more a question of working on samples which, through a succession of iterations, could be used to evaluate potential areas of applications. In a process of this kind, the sample is felt to be representative enough to express more general principles.

DEFERRED
The results of each stage had to be delayed for some time because it was necessary to send the samples by post for testing. This required a special effort in terms of organisation as well as in preparing the material, as there was always a need to define precisely the data to be collected.

TRIAL AND ERROR
Mould Machine forced us to understand the very nature of the materials and involved exploring proposals and avenues that were not in fact necessarily achievable. Some of the more challenging tasks included machining certain materials, particularly fibreboard. We learned a lot by processing the materials within the school facility.

FAILURE
Given the untried nature of these materials, it was frequently the case that the tests yielded nothing conclusive. In this case, there was an equal need to demonstrate a certain discernment in understanding the reasons for this failure and, following analysis, in being able to remedy it the next time. In this sense we can truly speak of a basic research project, because there was no need to yield a result. Augustin Scott de Martinville explains that, “There is something a little frustrating when 9/10 attempts do not work; even if that is a common ratio in a scientific trial, it is not the case in design. A lot of patience is required and there is no doubt that we had to learn to deal with the frustrations thrown up by this feeling of ‘failure’. In concrete terms, we confronted failure because we kept all traces of stuff which didn’t work. It’s a bit like looking at the embryonic forms of extinct species”.

EXHIBITION PIECE BY
BAKER WARDLAW
“I was asked to create a piece using a technique developed in the Mould Machine workshop. I chose to expand on the technique created by the students of the masters design programme. The Mould Machine workshop was basically a series of experiments to find new, quick, cheap, and innovative ways to mould glass. I first created a 3D model of my pieces, then Kapyfract AG was responsible for cutting and milling the form into stacks of their fireproof panels. Once the mould was complete, Matteo Gonet of Glassworks poured molten glass into the moulds and finished the pieces. Glass, of all common structural elements (like wood, metal or textile) is exceptional because of the diverse forms and functions it takes in our lives: windows and windshields, electronic screens, glasses for water. It is a sort of ultimate interface.” — Baker Wardlaw, artist. 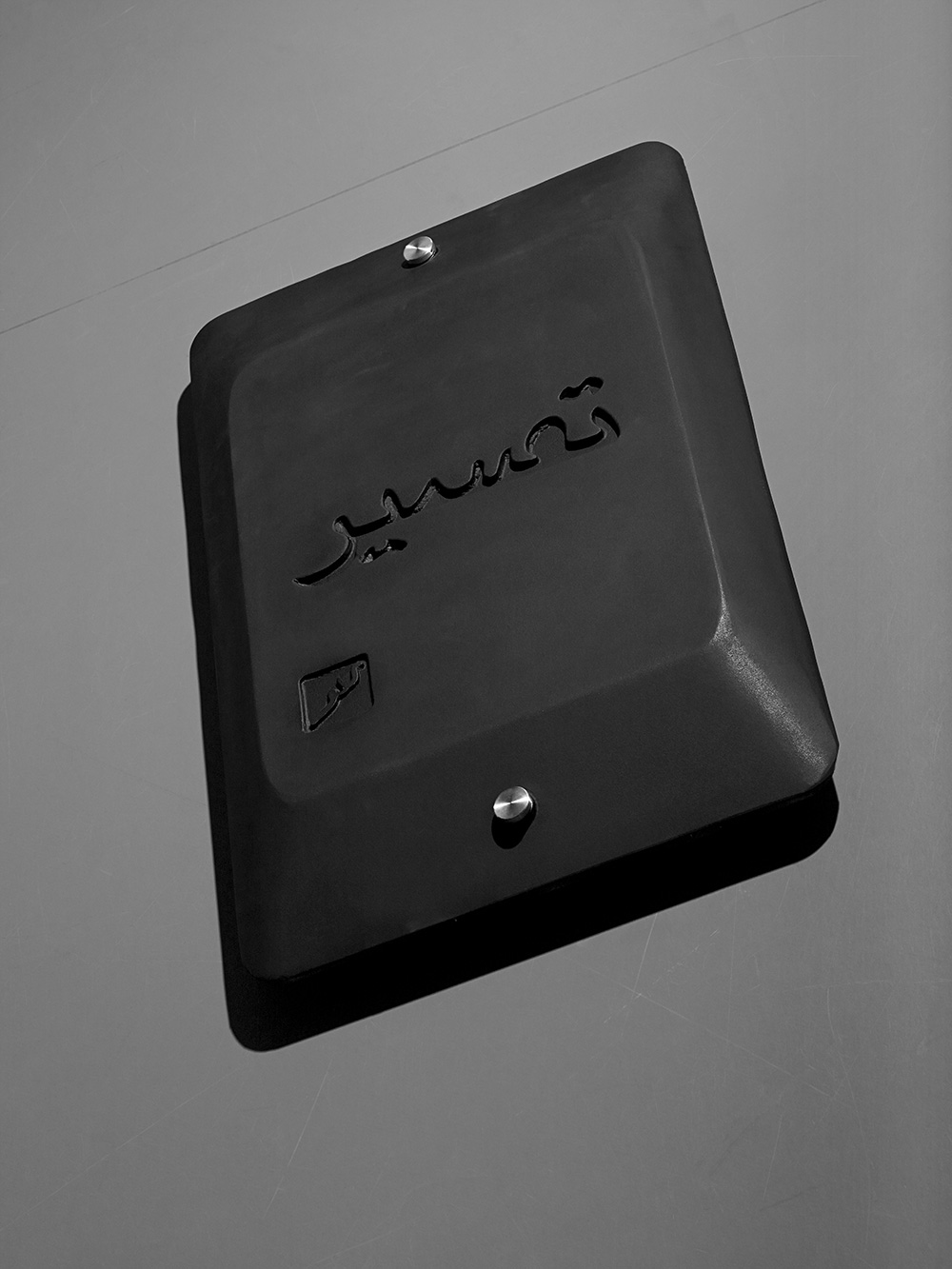 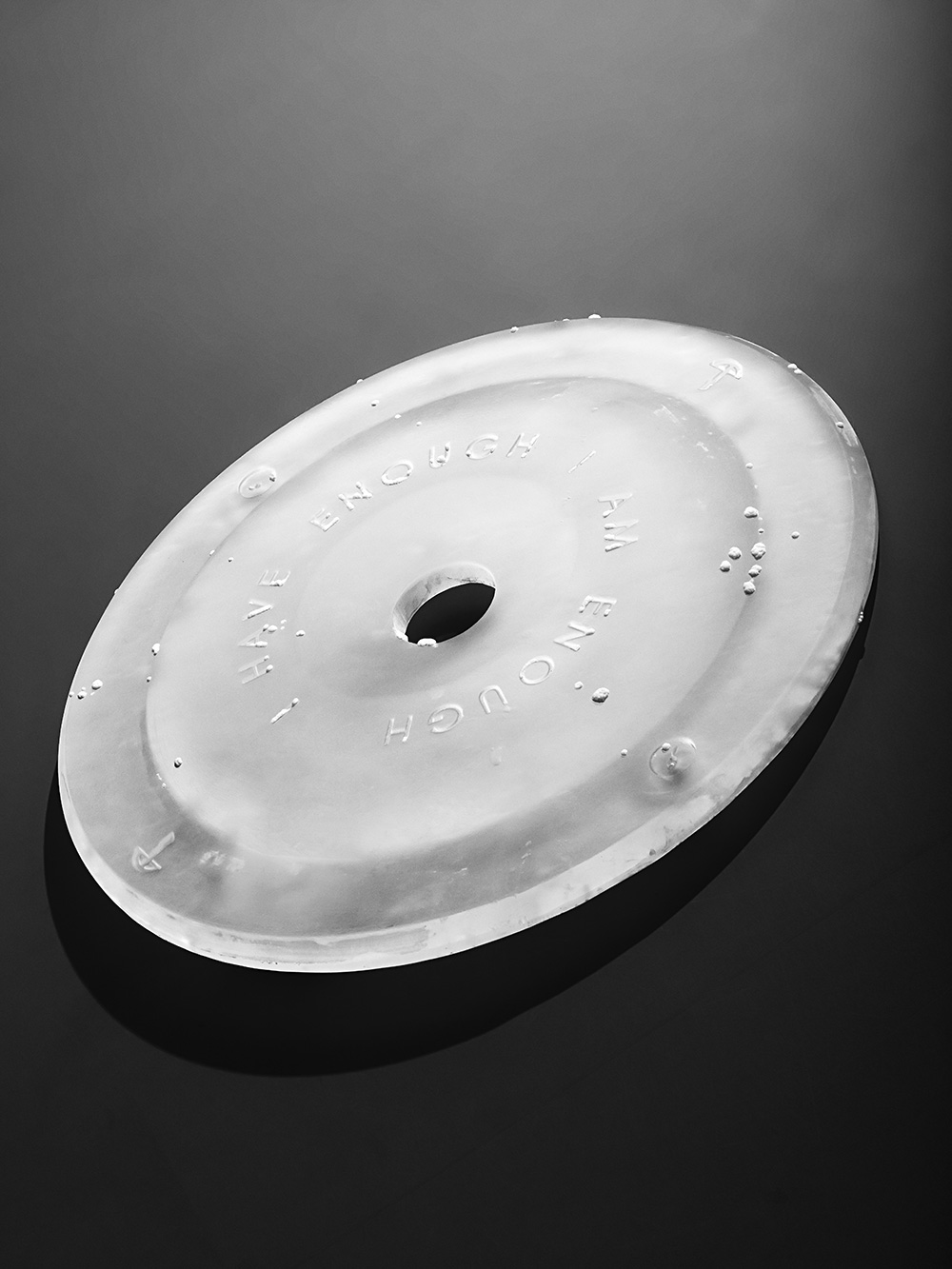