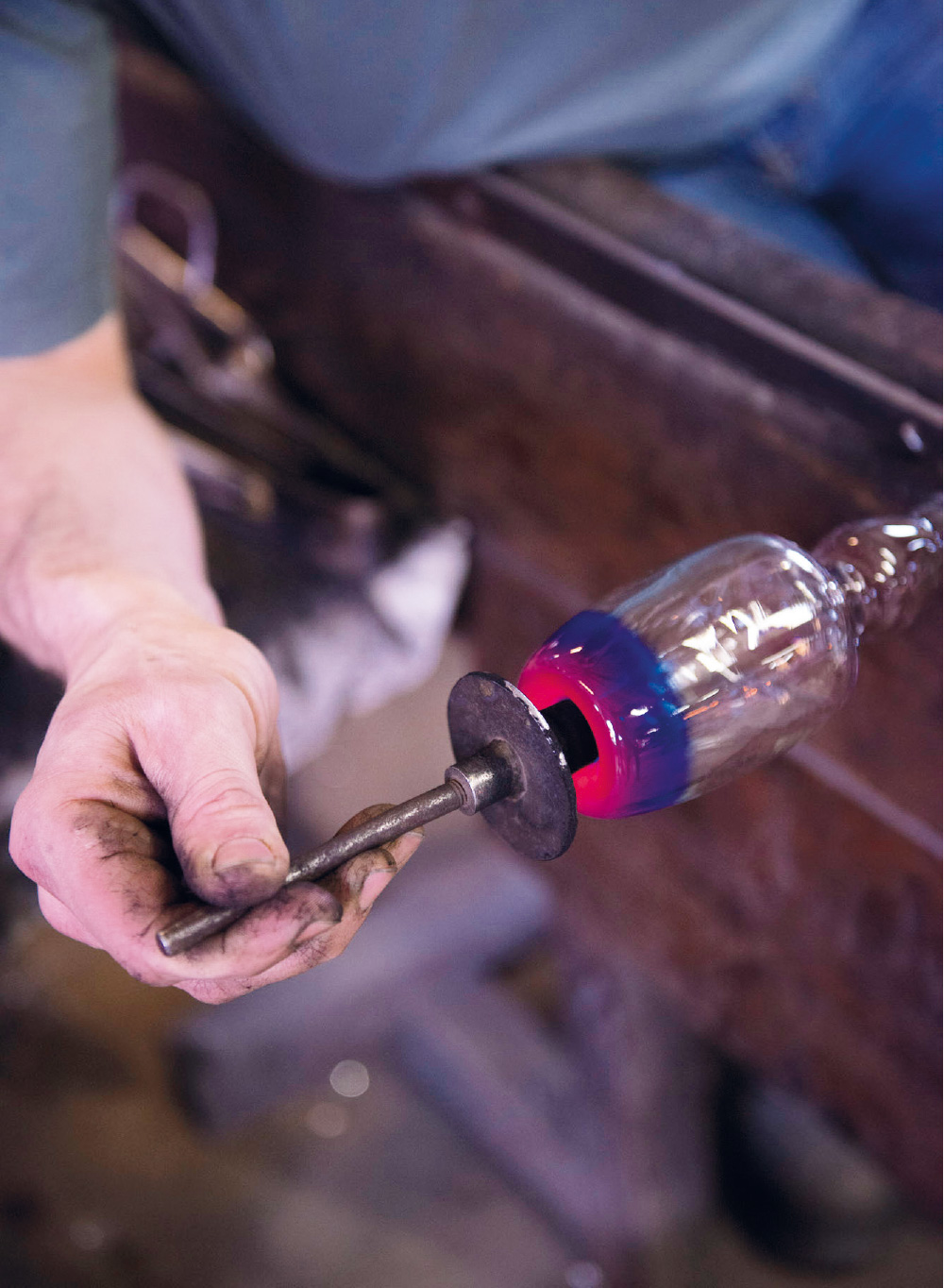 Meisenthal is the fruit of collaboration between the Bachelor and Master of Industrial and Product Design at ECAL and the CIAV (Centre International d’Art Verrier) in Meisenthal. The objective was to create a collection of simple objects, which would require as few manufacturing steps as possible and be suitable for production in the facility. The workshop took place in two parts and the selected prototypes were intended for small scale serial production. In the first place, an introductory week enabled us to define the extent of our ideas, methods and basic gestures. During a second week, the objects were finalised. All the various procedures were documented through concise specification sheets.

CONTEXT
Each workshop dealt with a problem of its own and we must look at their nuances, similarities and differences. Taking this contextual dimension into consideration is at the heart of the problem to be solved in the Meisenthal workshop. The questions related to ways of documenting a cultural heritage and passing on traditional skills.

CIAV
Meisenthal is a historic location in the glass world – the oldest factory on the site dates back to 1704. The mission of the CIAV is to pre­serve this technical memory and to ensure that this heritage endures, notably by bringing it into contemporary contexts. “It thus unites the traditionally separate worlds of artisanal production and industry, contemporary creativity and traditional skills, with the aim of inspiring new cultural, economic and touristic dynamics around professional glass-making”.

INITIAL GESTURES
Observations made during experimentation were used to develop further approaches, worked out around this series of “initial gestures”. The idea was thus to create objects that were simple and cheap enough to be compatible with the line of objects created by this artisanal factory which, despite relatively limited resources, has access to a wider network yet remains fiercely independent.

CREATING TUTORIALS
The initial stage consisted of observing the craftspeople in action, so as to define a series of simple movements. The job was to document these gestures in such a way that they could be reproduced in another context. This involved drawing up data sheets IM033 that were more like tutorials or culinary recipes, so that the reader could repeat a sequence of simple movements. The exercise was all the more interesting because these operations had never been properly documented during a traditional design process.

PROTOTYPES
As they related to very simple operations, it was highly likely that the objects would work at the first attempt. The pieces produced in this workshop are functional and help us to give precise information on the manufac­turing process, as well as the shape, appearance and, eventually, the commercialisation process. These designs are the closest to prototypes in the classical sense. That is: “a first or early example that is used as a model for what comes later”. They work as original models which can be referred to when producing artefacts later. 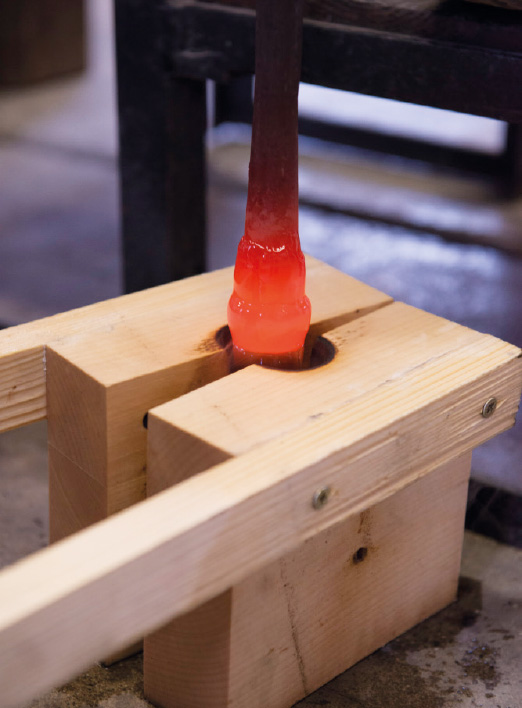 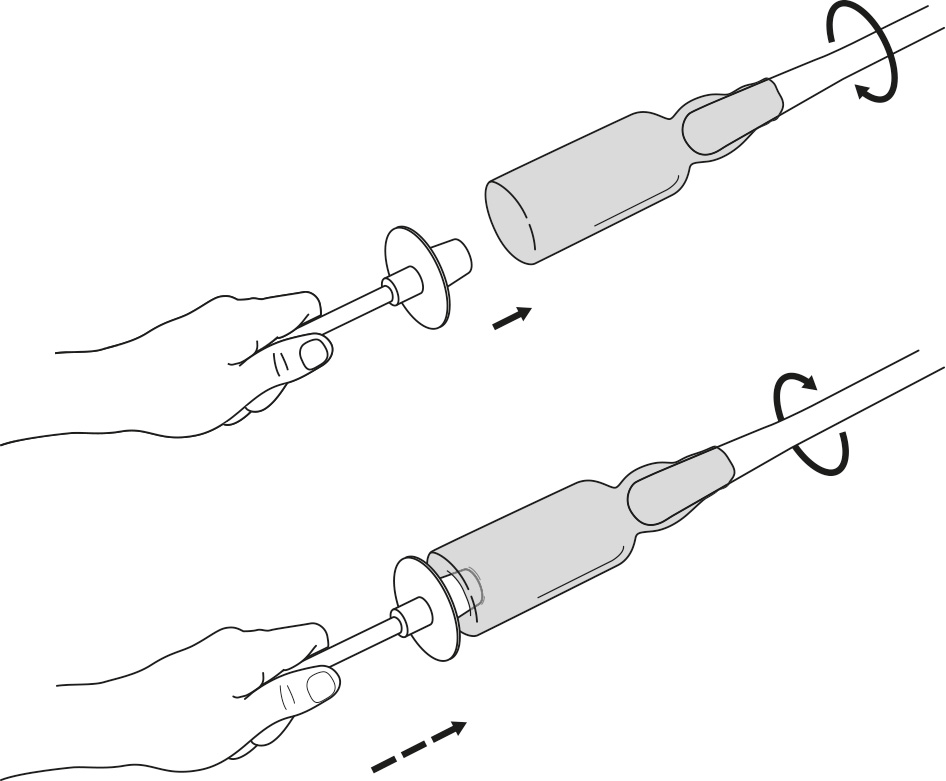 IM033 The specification sheets work as tutorials, or “culinary recipes”, of operations that could be easily repeated

MOULD
A receptacle used for shaping and/or decorating molten glass. Some moulds impart pattern to the parison when it is inflated inside the mould. After the parison is withdrawn from the mould, it can be further inflated and tooled to the desired shape and size. Other moulds are used to give a glass object its final form, with or without decoration.

KNOWLEDGE TRANSFER
By producing documents we express a desire to reflect on the production of didactic tools that can be used to transfer knowledge and repeat experiences.

MASS PRODUCTION
Ultimately, the objective was to select certain projects, developed in the course of the workshop, so that they could be incorporated into the company catalogue.

MONEY BOX
The idea behind this object was to minimize to the fullest the steps needed to hand make a money box, in order for it to remain inexpensive. The money box is blown in a mould, then pinched and set directly in the lehr where it will slowly cool down until the next day. Once it is taken out, it does not require any other manipulation and can go straight onto the shop shelves.

SIGNATURES
The workshop offered an opportunity for the assistants to create a project in their own names and some projects, particularly the Money Box, by Stéphane Halmaï-Voisard, went into larger-scale production.

EXHIBITION PIECE BY
MATHIEU RIVIER & PAULINE SAGLIO
“One of the objectives of Plan B was to find a simple movement that would be easy to reproduce so that arti­sans working in glass could easily create objects without knowledge of the project. This installation intends to pay homage to this principle. The spectator comes into contact with one of the realisations through a simple and intuitive movement: slipping a coin into a money box. The installation aims to extract this idea of a simple gesture and reposition it at the heart of a collective creation. Although its transparency means that glass is a material often used for practical and visual purposes, its acoustic qualities are neglected. When we insert a coin into the money box, we immediately hear the glass vibrating. As if it were a machine that we have recharged, the other money boxes that have been installed emit a reverberating sound, via solenoids concealed in the shelving. These repeated sounds immerse the spectator in an acoustic landscape produced by vibrating glass.” — Mathieu Rivier & Pauline Saglio, media and interaction designers. 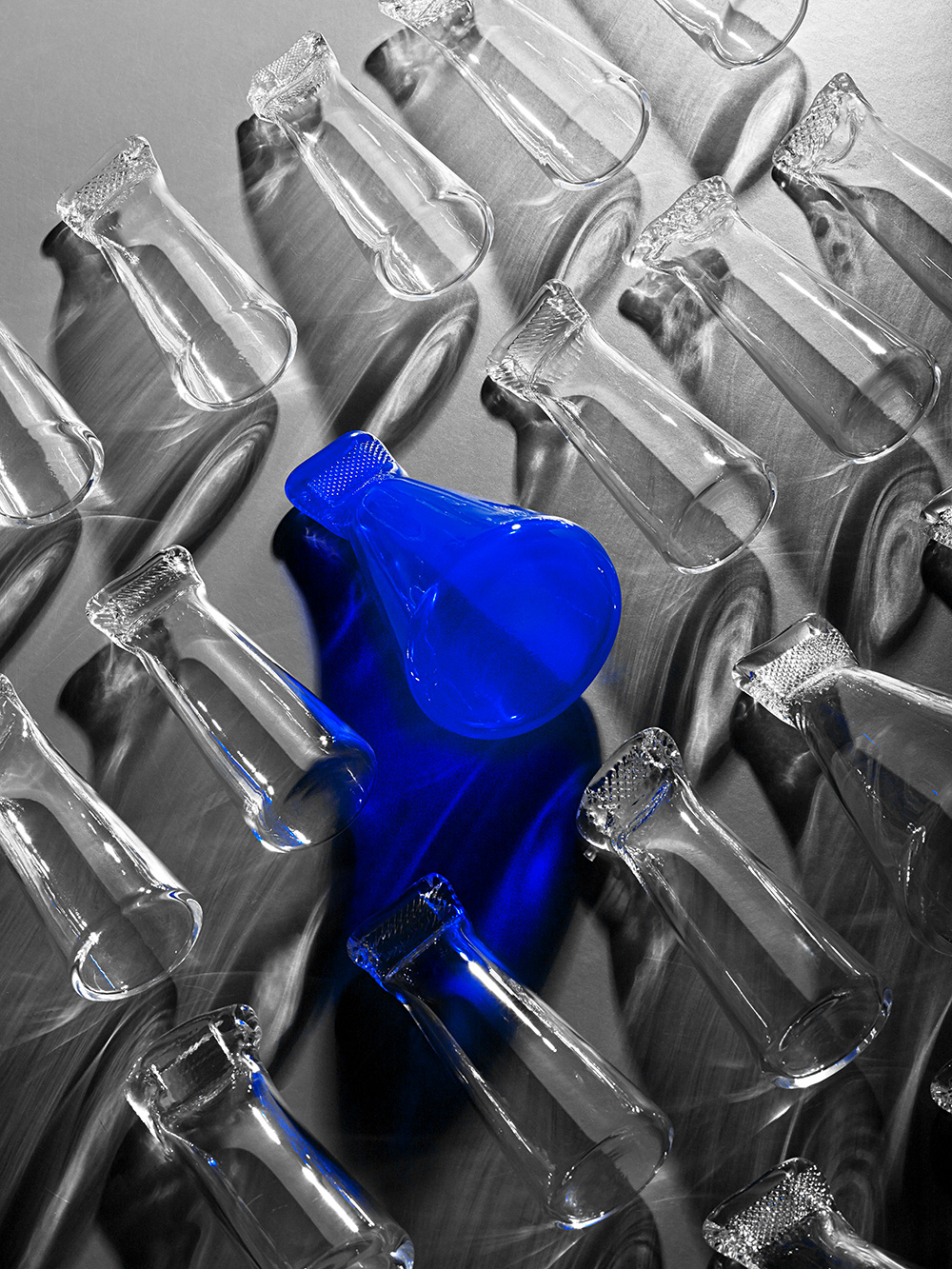