The objective of Hot Tools was to experiment with original methods of glassblowing, through creating innovative procedures and modelling tools. The workshop began with a visit, supervised by Ronan Bouroullec, to glass-blower Matteo Gonet’s studio (Basel). Starting from their observations and comments, the students were given five days to develop tools and scenarios to be tested in the studio. The objects created blend naivety with pragmatism and ingenuity, uncovering new perspectives on glassblowing. A selection of the most successful work was presented in Milan as part of the 2012 design week. Hot Tools made up the initial stage which served as a framework for the later phases of Heart of Glass.

CRAFTSMANSHIP
The aim was to develop a dialogue by working closely with glass craftsman Matteo Gonet. He had previously trained as a designer and worked at CIRVA (Centre International de Recherche sur le Verre et les Arts Plastiques). He regularly works with artists and designers and was thus extremely responsive to the students’ unusual suggestions. He explained that this experience had particularly helped him to contrast these two worlds: “On the one hand there is a world of artisans and technicians who have gained their expertise from years of practice. On the other, there are young students whose approach to the material is one of complete naivety. This opposition is a huge benefit when it comes to generating real artistic emulation and I greatly value this kind of project”. — Matteo Gonet.

SPONTANEITY
The students had two days in which to imagine and construct original tools, followed by two days in the studio to create their objects directly. The project therefore largely rested on their spontaneous ideas being immediately put into practice.

ONE-OFF
As a general rule, designing an object requires relatively long waiting periods between the stages. This is the major difference with glassblowing, where you can get immediate results. This involves a very interesting state of mind because you must be able to anticipate moments of flux. Paradoxically, despite – or thanks to – this lack of constraints, most of the pieces produced during the workshop seem finished. “It is especially hard to completely master each and every topic. What is required is a good insight, to be able to analyse, understand and use a situation to one’s own advantage. The workshop was a great example of how to come across a technique this way, because we had to quickly come up with something intelligent that could also be created within the short time frame. I forgot to mention that one of the main assets of this workshop is that physical objects also had to be produced in a few days work. A real challenge: it wasn’t just a project, but it also had to lead to a physical result; an object”. — Ronan Bouroullec.

TYPES OF GLASS
There was a sort of crescendo of difficulties in ways to evaluate and communicate the results. Considering that they were prototypes, the heuristic value of these artefacts is principally to be found in the singular processes that played a part in creating them. This was particularly the case for the various ways in which the moulds could change and alter the pâte-de-verre so as to solidify it into artefacts with unique forms and textures. 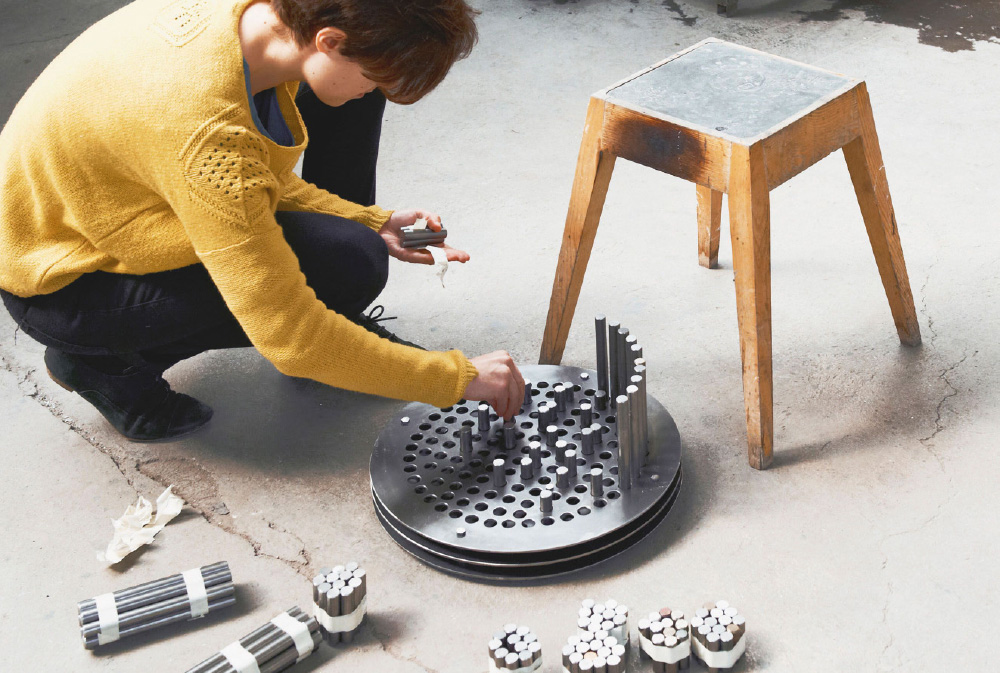 IM023 The movable steel pegs allow a range of configurations

PÂTE-DE-VERRE
A material produced by grinding glass into a fine powder and then adding a binder to create a paste, a fluxing medium to facilitate melting, and a colouring agent such as powdered glass or metallic oxides. The paste is brushed or pressed into a mould, dried, and fused by heating. After annealing, the object is removed from the mould and finished. Taken from the mould, pâte-de-verre has a matte surface that can be polished smooth. It can also be carved to refine the form.

FUSION
The system that runs through a workshop is in itself a key factor for success. The har­mony between the partici­pants, the stimulation provided by the objectives and so on all come together to create a distinctive context: “There really was a very special atmosphere, something extraordinary happened during that week. Perhaps this system was due to finding ourselves in a glassblowing studio, to seeing the pieces come into existence so quickly; it all added a touch of magic to the project”. — Camille Blin. 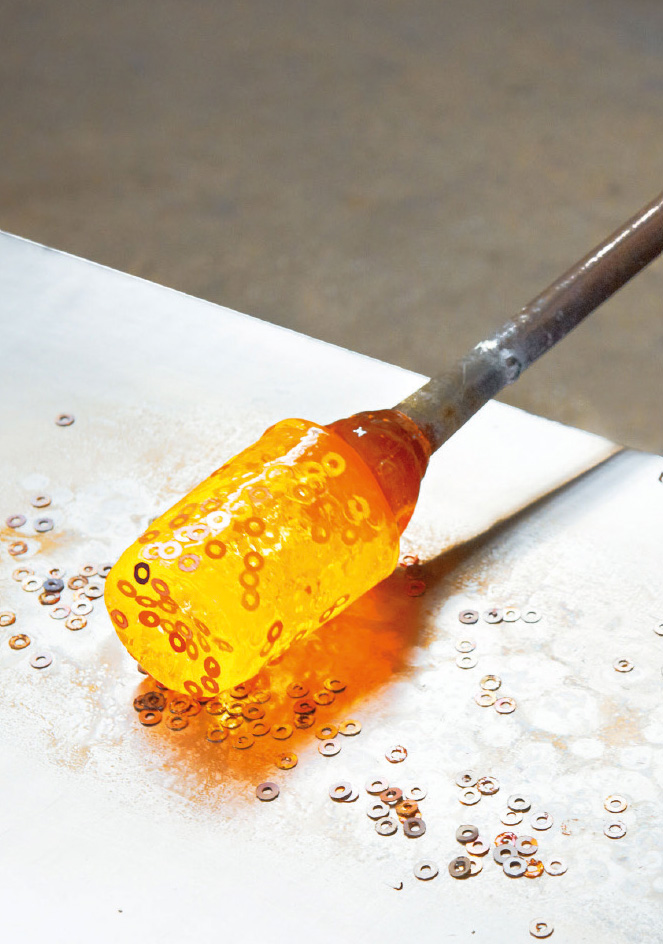 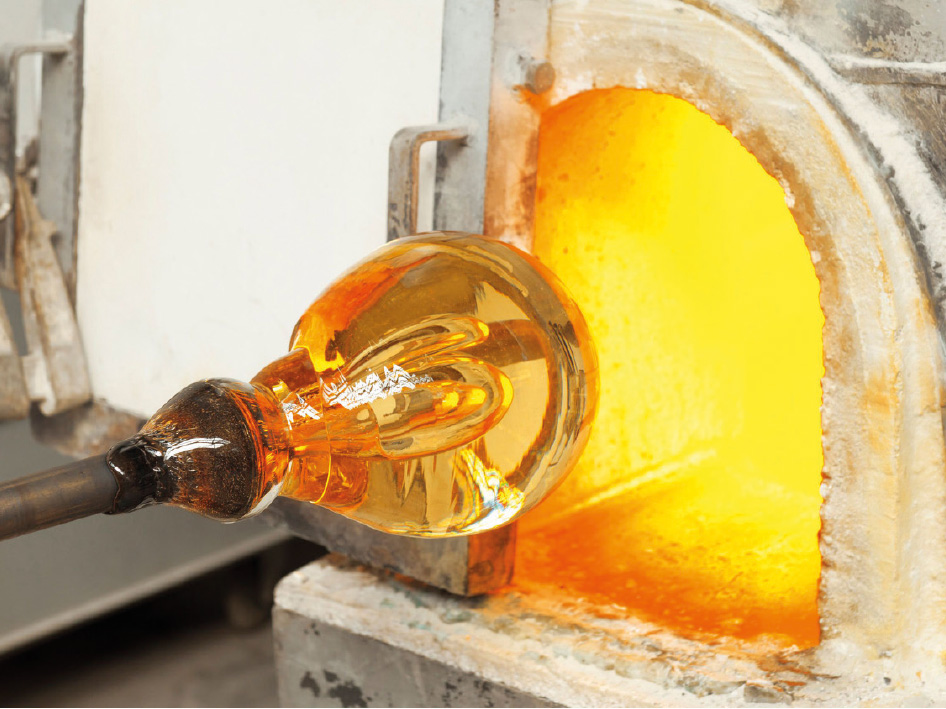 TOOLS
The problems to be solved did not really have any bearing on the usability or formal qualities of the objects themselves. Whether the final artefact was a vase or a “thing”, it had been initially envisaged as a pretext, a kind of by-product. A tool is defined as “something (as an instrument or apparatus) used in performing an operation or necessary in the practice of a vocation or a profession”. The original idea for Hot Tools was thus to produce novel instruments with which to make objects in glass. This stance involved paying more sustained attention to the creative process rather than stopping at finished objects. All the pieces created are different and unique, but they were never intended to be integrated into optimised mass production. This love for inventing tools and cobbling them together is a recurrent theme through all the stages of Heart of Glass.

OBJECTIVITY
Transferring knowledge through practical experiences is central to this type of project and it is impossible to only present its positive aspects. To correctly evaluate the efficacy of the systems in place, and thus to gain from the workshop’s heuristic value, we must focus particularly on the elements that did not work. This creative research model requires as much objectivity as possible when it comes to communication. In this way, each object reveals the traces of the process and becomes a kind of tool with which to evaluate the feasibility of an idea.

EXHIBITION PIECE BY
BRYNJAR SIGURðARSON
The film made by Brynjar Sigurðarson, ECAL professor and designer, went a long way towards making the project intelligible, notably by focusing on the spectacular and extremely physical nature of what goes on in a glassblowing studio.

“The initial idea was very basic, to document the students’ projects during Hot Tools with Matteo Gonet. Being at the workshop you start to notice all these weird, almost mystical scenes: a bucket on the floor, full of boiling water, tools that could rather belong to a butchers and materials that look like leftovers from a construction site. It’s a very different world from my everyday environment, where in the centre of the scene the glass­blower swings a metal pipe with 10kg of molten glass at 800°C on the end of the pipe. The students did the rest, and my only role was to be sincerely curious about what they were doing and then to convey that curiosity in the form of a video”. — Brynjar Sigurðarson